This post is a tale of straining and strained muscles: straining, because it was the day of the South Downs running relay: and strained, because I tore a muscle in my leg early on and limped the rest of the way. 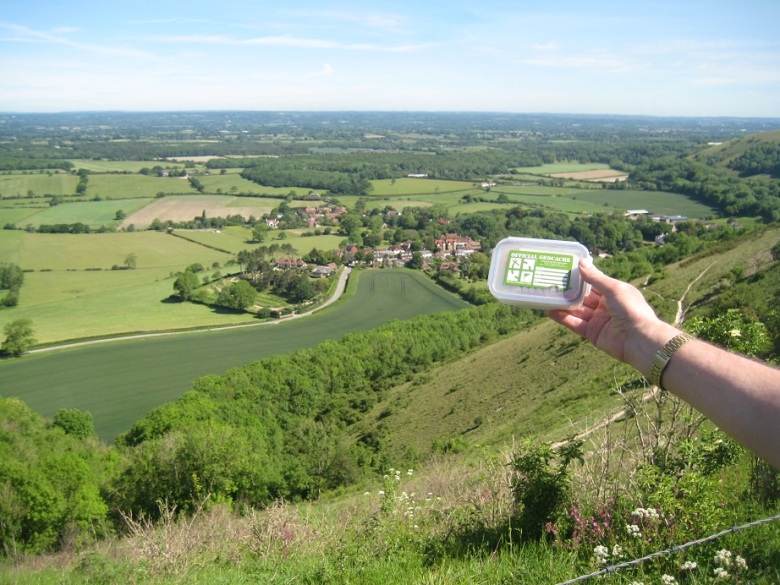 Parking at the Devil’s Dyke car park ( £3 all day!), we saw paragliders preparing for take-off, admired the superb view in the sunshine, then turned away and went into the trees, to look for the first cache of the day. Mr Hg137, holding the GPS, surged ahead, while I followed. And here was where it all went wrong for me; I tripped on a tree root and tore a calf muscle. Meanwhile, Mr Hg137 ignored the pained cries and strode on to find the cache, hidden in a rather wet cleft in a tree.

We moved on to a cache from the SDGT (South Downs Geo Tour) series, placed at the remains of the top end of the funicular railway which carried Victorian folk up to the Dyke. Although we have both been here before – especially Mr Hg137, whose family comes from Brighton – neither of us have ever been to this spot with its brilliant view. Next, we found a multicache based on the trig point at Devil’s Dyke, with the final cache located at one of the less-visited areas around the Devil’s Dyke. After this, we stopped for a coffee (and painkillers for me!) before a look down the dry valley of the Dyke. 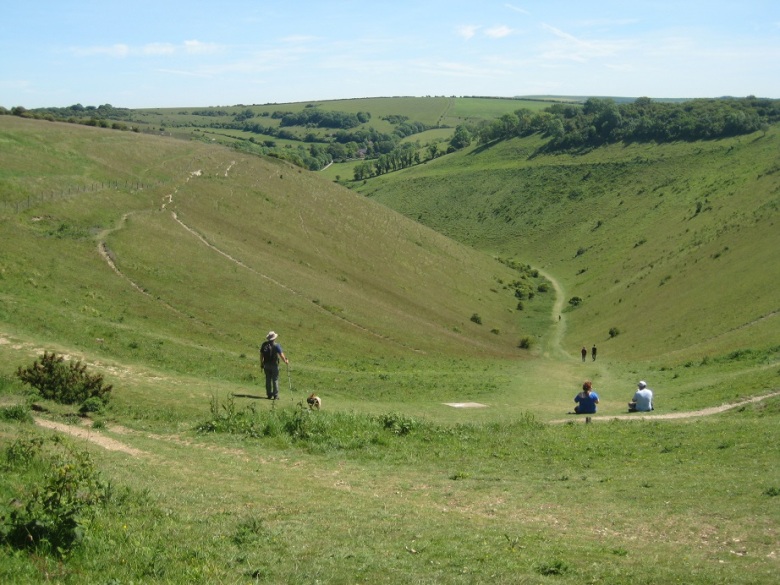 We had one cache to do before we left the Dyke, one which had been on our ‘to do’ list for some time. It’s Church Micro 666 … but where’s the church? … and the name of the place isn’t on the side of the angels, either. To overcome those deficiencies, the cache owner has set and described the cache as follows:
”The number 666 has many sinister connections and so was not really suitable for a normal church, it needed to be hidden somewhere a bit more devilish.
The Devils Dyke seemed such a place but as anyone with local knowledge will realise, there is one small but important flaw here, that is the lack of a church, although maybe there used to be as local folklore explains the valley as the work of the devil. The legend holds that the devil was digging a trench to allow the sea to flood the many churches in the Weald of Sussex. The digging disturbed an old woman who lit a candle, or angere causing a rooster to crow, making the devil believe the morning was fast approaching. The devil then fled, leaving his trench uncompleted.
To overcome this minor hiccup I have gone to the trouble of building a church myself, have fun.”

We found the cache, and, yes, it’s well worth it! 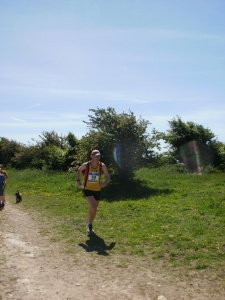 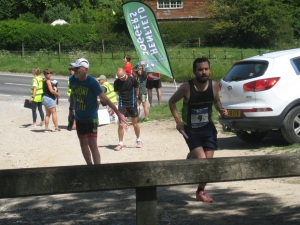 We now had a downhill section to a road crossing at Saddlescombe. There were no caches along here, but we had the South Downs Relay to watch as we walked http://www.southdownsrelay.com/rules/ This is a running event, usually held on the first Saturday in June; there are 18 legs covering almost the entire length of the South Downs Way, from Beachy Head, near Eastbourne to Chilcomb, near Winchester, and each of the team of 6 runners tackle 3 stages. It takes them 12-14 hours to run the whole 97 miles, including 13,500 feet of ascent and descent. Phew!

Several runners came by during our descent, and we stopped for a short while at the road crossing to watch the changeover point between legs 6 and 7. Having crossed the road, we started the climb back up the other side, keeping well out of the way of the runners charging down the hill. It was getting hot now, and it was good to be climbing the hill in the shade of trees; I didn’t envy those runners, pounding up the bare hillsides in the burning sun! 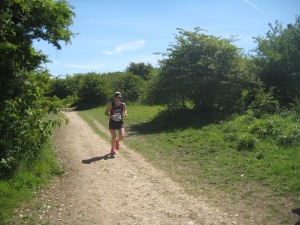 Along the next part of our route, we were looking for some of the caches from the TC (Treble Clef) series. These are a set of 35 puzzle caches, based just north of Brighton, and with a selection of music-themed puzzles, which we had solved before setting out – the final caches are in a variety of places, some of which were on, or close to, our route. We tackled nine of the caches from the series, finding five of them. (Editor’s note: Mr Hg137 tried all nine caches, while I wimped out of some of them, as my pulled leg muscle just wasn’t up to scrambling up banks and I was trying to minimise ‘extra’ walking, where possible.) 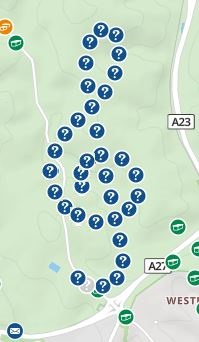 Apart from the runners and their support teams, there was also a steady stream of walkers and cyclists. It was, after all, a warm, sunny, summer weekend. We met two people doing a butterfly survey, and also came across a father and ten year old son resting in the shade of a tree. They had walked from Winchester in five days, and they planned to reach Eastbourne in two more days, which is pretty good going whatever your age. 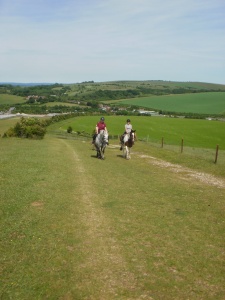 After a few miles, we left the caches from the TC series behind us and started a long descent into Pyecombe. The police helicopter flew over, low and slow, which generally doesn’t bode well. We reached the A23, a very busy dual carriageway, and crossed it on a bridge. Quite a few people were there, watching the rather average-looking traffic. There must be more interesting things to do on a beautiful summer’s afternoon, so we asked why. Earlier that day, hundreds of Hell’s Angels had held a mass “ride out” down the A23 to Brighton to celebrate their 50th anniversary in the UK, under police escort and watched by the helicopter. All became clear … https://www.bbc.co.uk/news/uk-england-48482042

Church of the Transfiguration, Pyecombe

Once over the A23, we were in Pyecombe, which is now a quiet little village sandwiched between the A23 and A283. The Church of the Transfiguration is in the centre of the village; it’s Grade-1 listed, dates back to 1170 and has a tapsel gate. But, for two hot, thirsty geocachers, it also has a kitchen inside, with water, fruit squash, and tea or coffee, all available for a donation; and it has a Church Micro geocache. 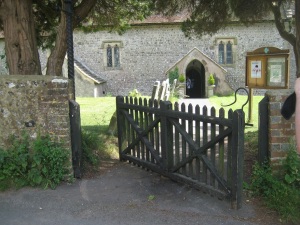 ( Editor’s note: tapsel gates hinge in the middle, not the side, to make it easier to carry coffins through. They are only found in Sussex, and there are only six altogether. There’s another on the South Downs Way at Botolphs. https://en.wikipedia.org/wiki/Tapsel_gate ) 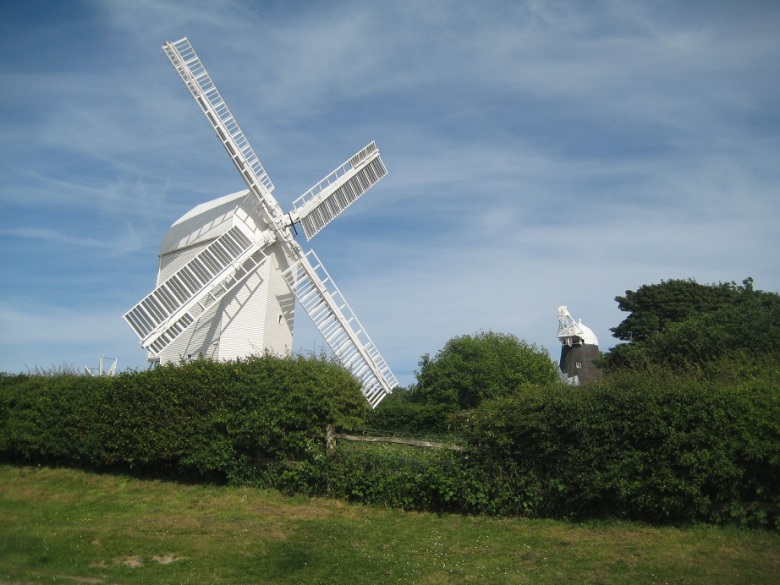 Not far to go now, but it was all up. We crossed the A283, went through the car park of Pyecombe Golf Club, then yomped (or limped) straight up the hill, to retrieve the geocar, parked in the (free) car park next to the Jack and Jill windmills. (Editor’s note: Jill is the white windmill with the sails, Jack is the sail-less black windmill. ) It had been a beautiful summer’s day, with grand views, but my leg was hurting now and I was quite glad to finish. It was only later, as I went pink from sunburn, that I found out how patchy I had been at applying suncream …

Here are some of the caches we found: